Posted on January 1, 2018 by Sheri @trail2peaktheadventurouspath 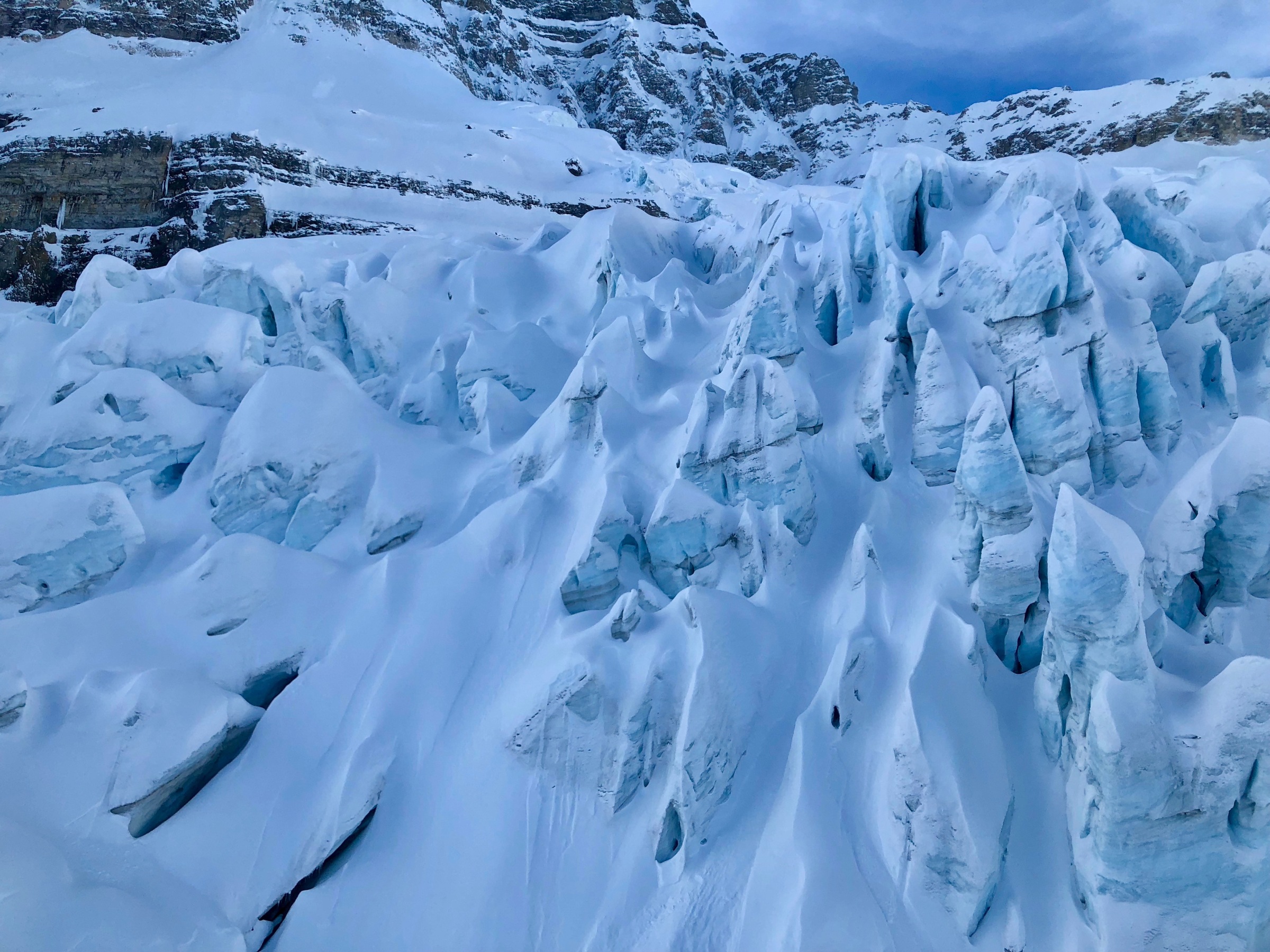 Bill and I have been married for 25 years now, and we decided to mark that momentous occasion with a special treat: a helicopter tour over the places that we’ve been hiking, snowshoeing, photographing, adventuring, skating, cycling, and picnicking our way through the years.

A helitour would give us a birds’ eye view of some adventurous milestone locations for us as a couple. It is the sense of exploration and adventure… in landscapes close to home and in our travels abroad… that have helped us bond over the years. Those adventures have given us a shared purpose and history, and so they’ve connected us deeply. They’ve helped us parent our children, make strong friendships, develop a few unique passions… and given us a wealth of experiences that have helped us feel ever-so-alive.

Celebrating 25 years while also exploring our old haunts from a new perspective seemed the perfect adventure on a sunny winter day. It was touch and go whether or not we could go on the actual anniversary date, given the very cold (-30C) temperatures we’ve been having here lately, so we ended up going a few days late, on New Year’s Day, instead. And so, we’ve rung in the New Year with a terrific, adventurous start.

Our journey began, flying over our home in Three Sisters, and then on up and over the Three Sisters Pass and into what the locals call “the Spray” (that area of the accessible Kananaskis backcountry that surrounds the Spray Lakes reservoir), and then on into Banff National Park, touching down on the shores above Lake Aurora near Mount Assiniboine Lodge.

One of our hopes was that we’d see the point that connects the two sections of the Three Sisters Pass route that we’ve been able to accomplish so far… we’re so close to completing the route (if you’ve been following along on this blog for a while, you’ll have read of some of our attempts to gain Three Sisters Pass from the town side and connect it to the drainage on the Spray Side). It looked so simple from the air! Ha! We gained no good beta though, as the recent spectacular snow fall obscured the terrain detail

We flew over Spray Lakes, the huge body of water that we skated along two weeks ago when the surface was swept clear of snow and had frozen as smooth as glass. 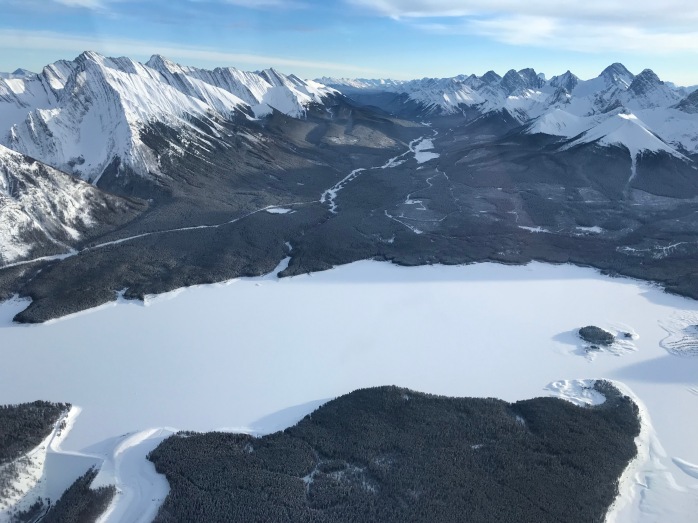 Our helicopter pilot, Isaac, did us a bit of a favour and went off his route slightly, flying closer to Old Goat Glacier, so that we could see the top of the glacier that had been hidden to us on the hikes we’ve done up there. It was such a treat to see its size and shapes and its blue depths from above.

Our route took us over the continental divide, that great jagged line the separates Alberta from British Columbia. Alberta lies on the side where everything drains to Hudson Bay & the Atlantic Ocean; BC lies on the side that drains to the Pacific Ocean. And its boundary is demarcated by a jagged line, connecting the tallest of the peaks along the spine of the Rocky Mountain range. It’s quite a sight to see, passing over top of that narrow spine!

It was really a very gentle ride, even though we were going  160 miles/hour (almost 300km/hour with a tail wind, at one point!). Watch the video below and you’ll see (though you might want to do it with no sound).

We touched down on the shoulder above Lake Aurora in a spectacular area of buried larch trees and old pines.

The snow was incredibly deep and powdery and covered the landscape in a brilliant cloak of white. The air was crisp, and we had a bit of an inversion, making it not quite as cold up there, and the sky was a brilliant blue. 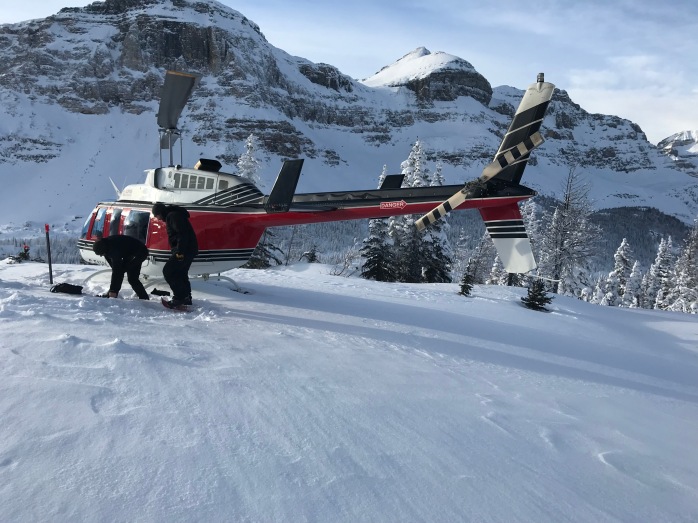 We put on snowshoes and explored around the slopes and gullies for a bit, amazed by the beauty (and by the tops of trees that snagged our snowshoe cleats beneath our feet! Yup! That’s how deep the snow was up there!).

Bill had brought along a small bottle of champagne for us to celebrate our milestone… and we drank it out of our metal hiking glasses, while taking in the beauty of the landscape, the absolute silence of the sound-deadening snow blanket, and the comfort of our companionship.

Then we romped about and played a bit in the deep snows…. 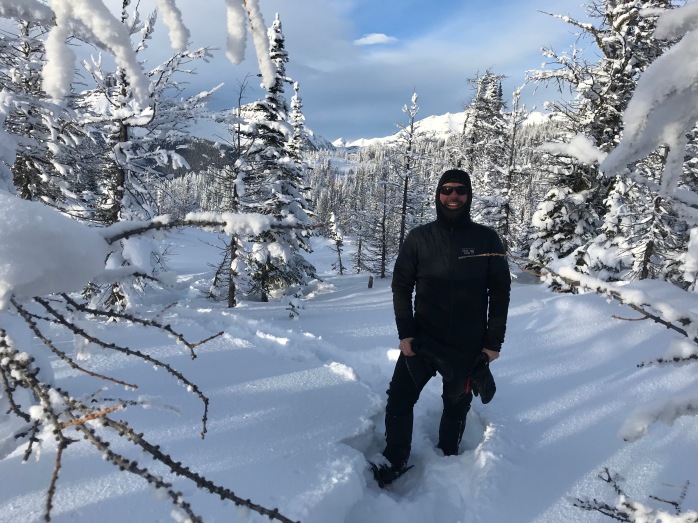 We had such a blast, before it was time to re-enter the helicopter and get belted in for our route home.

On the way back, we passed by familiar Kananaskis hikes like Sparrowhawk Tarns, Tent Ridge and Wind Ridge. We flew close by Windtower, with its towering cliff and long ramp approach…

We passed alongside Buller mountain, where we’d hiked the Buller/North Buller circuit, Guinn’s Pass, and Ribbon Creek before.

And then we re-entered the Three Sisters Pass, hugging close to Big Sister, and then passing over the forests with their matchstick trees…

…and the Bow river with its inky curves below before finishing our date back on the helipad.

Being a tourist in our own backyard was a fun way to begin 2018, and this year’s adventures! We loved it! 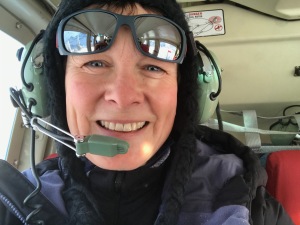 We used Alpine Helicopters out of Canmore and booked a private tour so that we could touch down, get out of the helicopter, and explore. They run tours winter & summer, and have even done a wedding up at our landing spot!

Alpine Helitours were running about an hour behind our booking time when we arrived, which was unfortunate (given that we were dressed in LOTS of warm gear! and they never called to give us a heads’ up), but we had a great time once we were up & away. Our pilot was very friendly and knowledgeable and we felt very safe in his care. He clearly loved his job and said it just never gets old… and he gets to live in Canmore!

If you do it in winter, you can bring your own snowshoes, which would making getting in and out of your gear in that deep snow a far easier thing to do, but the ones they have for you to use are good quality.

There’s no doubt, it is expensive… but it’s one of those bucket-list, once-in-a-lifetime things and well worth the exhilarating splurge. Their 15 minute fly over tours are far more reasonably priced.

Click here for more terrific hiking adventures in Kananaskis Country (Canmore Area). And check out more hikes from Canada and our adventures around the world here.

← Skating on the Spray
Skiing the Fairview Trail →

21 Comments on “A Wintry Heli Tour”