Posted on May 11, 2017 by Sheri @trail2peaktheadventurouspath 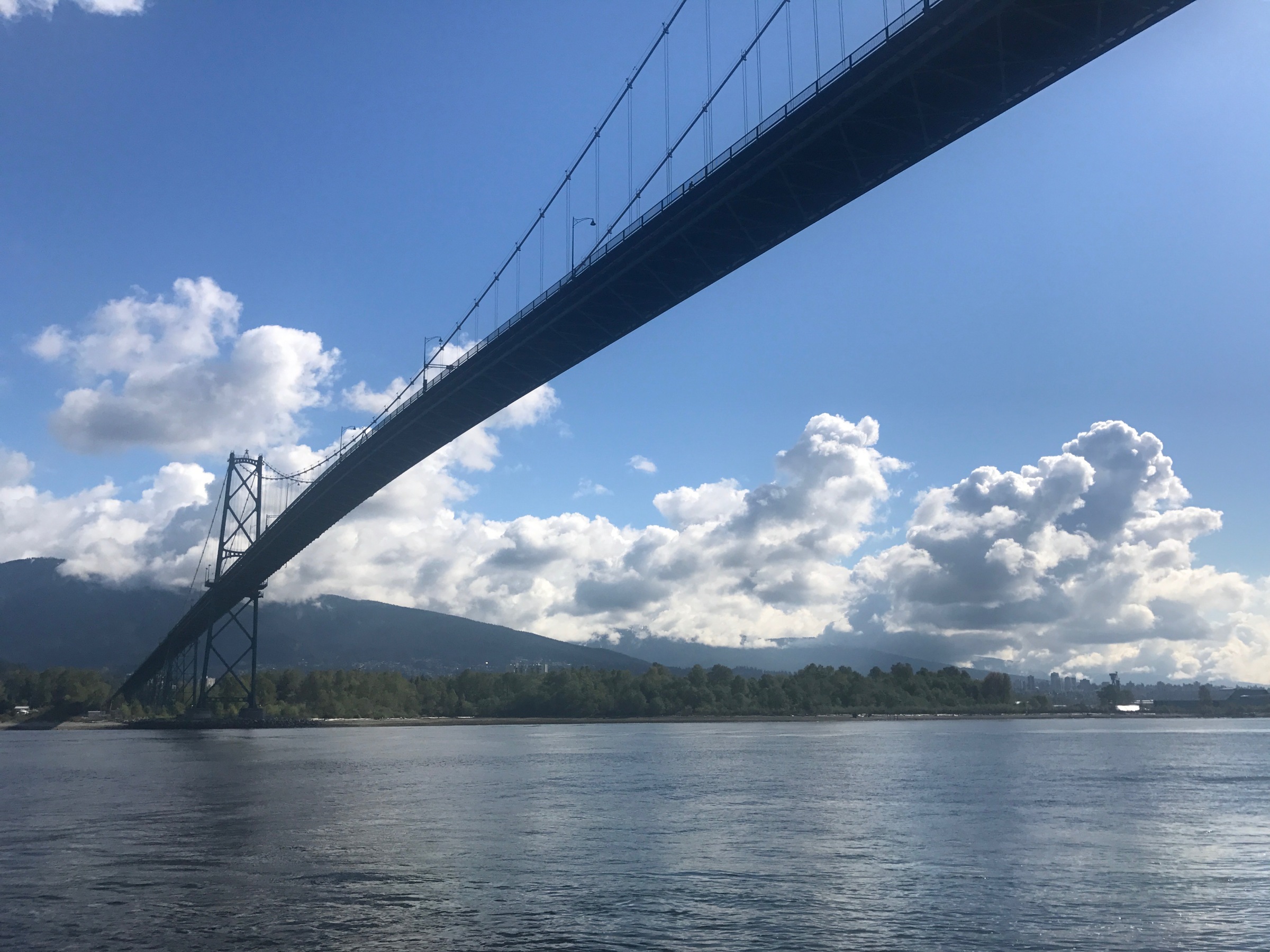 We almost missed her. She was so quiet. So still. Face looking down, way down to the rocks that shored up the pillar far below. Feet stepped up, balanced on a ledge between the rungs of metal fencing. Face calm. Expression flat.

There, but not there.

Too often I see titles in the newspapers about our Truth and Reconciliation Commission here in Canada. Its purpose is to listen, give voice to, and in the process attempt to heal, the huge rift in our society caused by deep wrong-doing by our government decades ago to the indigenous population here: from taking away land and forcing people onto reserves, irreparably changing and obliterating the way of life of a nomadic people to forcing assimilation by outlawing expressions of cultural heritage, and pulling children from homes and families and sending them far, far away to residential schools where many experienced horrific isolation and abuse. It is far more than I can bear to read about over and over again in the news.

And so I callously choose not to read about it and turn a blind eye. And in my sheltered life, I rarely see or feel or encounter the ripple effect of this black spot on the history of our nation.

This week, I had to face it.

We were in Vancouver, probably the most beautiful city in all of Canada, for Bill’s work. Tucked into the coastal mountains it is a modern city full of glass and steel skyscrapers, tulip beds and cherry blossomed trees, fascinating architecture, a vibrant downtown, beautiful parks and 2.4 million people.

We had added on an extra day at the end of the event to relax and explore the beautiful city. Even though we were in an urban setting, we decided to do a long hike (that comes as no surprise to those of you who know how much we love hiking!).

A full-on day hike from downtown up through Stanley Park, across Burrard Inlet on an incredible suspension bridge, then up the river that divides West Van from North Van up to the city’s huge water reservoir, the Cleveland Dam, and then back would be just right. The plan: strap on comfy shoes, pack our raincoats, pick up a Whole Foods picnic lunch, and explore the urban landscape and some of its spectacular parkland gems.

Part of that journey took us across the Lions Gate Bridge. An impressive, engineering marvel of a suspension bridge it arches gracefully from the peninsula created by Stanley Park over Burrard Inlet, high enough to let gigantic ocean freighters pass below, over to the city’s north shore.

Had I not wanted us to poke about on the trails in Stanley Park instead of doing the direct route, we’d have crossed too soon, and…

Had Bill not wanted us to take photos from the east side of the bridge where he was convinced there’d be better views back of the city, instead of the west side that we were set to traipse across…

Had we ridden bikes or rented a car, and not been on foot…

Had we not…. well, there’s any number of permutations possible here….

However we spin it we were, for whatever reason or by whatever design, in the right place at the right time, there to take notice.

It was a surreal scene. She was surrounded by so many people and so much activity, and yet she was alone. Hoards passed her by, and there’s no way they’d have seen her. Tight automobile traffic, intent on the narrow lanes and the volume of vehicles in the bridge roared by, just a few meters away. Fast bicycle commuters zoomed by, just feet away from where she stood.

Isolated, she was surrounded by humanity.

Tucked into a jog in the path that went around one of the massive bridge supports, she was literally invisible. Unless you were on foot. Unless you were acting like a tourist, with constant glances back over our shoulders to take in the views of the downtown as we were.

Was she going to jump? We’ll never truly know.

But what we do know is that we were able to stop and ask if she was ok.

We knew that we could find a dignified way to get her to step down off those bars.

We knew, if only in those immediate moments, that we could somehow find a way to convey that even strangers can care about her.

We knew we were there to wait her out until she could find the words to give us first her name and then, eventually, the name of a person she trusted us to call.

We knew that despite our best attempts, she did not want to talk to us. Fair enough.

We knew that she somehow found the strength to step down off that metal fence and to walk with us on that long, slow journey off the bridge. One foot in front of the next.

Bill hung back trying in vain to reach a suicide hotline live body. Three times he got only an answering machine. He hung back, giving me the space to work with her, thinking female-to-female might be best until she found the words to give me simply the first name and the phone number of someone to call.

It was far too noisy to call from the bridge, and we SO wanted her on terra firma. So we waited to call until we’d touched down on the other side of the inlet. Bill and I communicating in glances & gestures.

Having dialled the number she gave me, and thinking I was calling a friend, I was surprised to reach the voice mail of Annalee, a UNYA Mediation Counsellor. I left a message, then looked up the organization (Urban Native Youth Association) and called the main switchboard. (Thank goodness we walk around with little hand held computers in our phones these days!) Ultimately they were able to find Annalee, the person she had identified.

Annalee talked to her by phone for a while, while Bill and I waited out of earshot, giving her privacy. Annalee must have worked some magic as she was better, more full of life when she handed me back the phone. Annalee told us she’d drop everything, cancel her afternoon appointments and work with her. We were to put her in a cab that would take her to the centre. Annalee was confident she’d get there and come in to see her, and not flee.

We arranged for a cab to come and get her, saw her off and wished her luck with what I was adamant to call her “fresh start.” And then we continued our walk, and boy, did we need a long walk more than ever to process that intense event.

About an hour later, we got a text saying that she was there, and that things were going well. Thank goodness!

Did we handle this perfectly? Most likely not.

But we muddled through it, guided by instinct, and a strong sense that this girl would be more successful if she could connect with someone she knew. More empowered. More grounded. And that the experience would be more dignified without the jarring noise of sirens and the unwanted attention and stares of people passing through a traffic jam that would have come from a 911 call.

Landscapes, especially large urban ones, come with their beautiful and their scarred features. As it is, even on a mountain top or ridge walk, if you look closely, if you really see your surroundings, you can be in for some incredible experiences. Be it on a huge expanse of steel and concrete, an engineering miracle that inspires some and acts as a pinnacle of despair for others; or be it on a peaceful hike through a redwood forest… big landscapes are incredible things.

The opportunities we have in landscapes, and in life, are so full of potential. In short, this life is an incredible gift. I will never look at suspension bridges the same way again. But I say that without dismay, sorrow, regret or remorse.

Organizations like UNYA exist to help aboriginal youth navigate this crazy world and come to terms with their challenges, and often their highly difficult life circumstances.

The main point I’m trying to make is that I’m so very grateful that people like Annalee do the incredible jobs that they do. Annalee had built up a relationship filled with trust with this young girl. She had forged a powerful connection. And that is no small feat. That is what saved her here.

May your adventures take you unexpected places and may you find yourself changed in the process.

For more posts about our Vancouver trip, please go to the Vancouver Travel section of my blog. And for other places we’ve been around the world, poke about under the Travel tab of my Blog.

16 Comments on “The Invisible One”