Hiking With An Old Man Up Old Man Mountain

Posted on February 9, 2017 by Sheri @trail2peaktheadventurouspath

There’s something really, really neat about doing a hard thing. Doing something that is physically demanding, incredibly challenging and limit-pushing. Climbing up Old Man peak was that thing for us. It makes you come alive in ways that I just can’t describe.

We’ve been to Jasper many times over the years and have done most of its well-known, iconic hikes. Wanting something different, something longer & harder, and something that would take us the whole day, we asked at the concierge desk at our hotel for some advice when we were there in the spring.

Lucky for us, we got a lovely, delightfully-perky, 20-something, hiking-enthusiast girl to help us. She said that one she had done that she was really thrilled about (having accomplished ticking it off her own personal bucket list earlier in the week) was climbing up Old Man Mountain (also known as Roche Bonhomme). She cheerfully said it was challenging, and the views were ah-mazing, and she gave us directions to its unmarked trail head, even offering to drive us! Giving us no warning or words of caution, she sent us off on our way. We had NO idea what the experience had in store for us, given all her smiles!

Known only to the locals, it doesn’t make the guide books because it is not an official Parks-maintained trail. It is essentially an animal track that heads up, straight up, following a drainage channel to a scree slope with some moderate scrambling. It goes up, straight up. No switchbacks, it is relentlessly up. Did I mention that it was STEEP?

To put it in perspective, it took us as long to come down the mountain as it did to hike up because taking its trail down meant that you had to place every step carefully with poles planted firmly so you didn’t slide! Good poles and boots were essential here! At times, the track disappeared into tight thickets of pine trees that we had to force our way through, like we were chasing a rabbit. But we never lost sight of the trail.

We were hiking along a drainage channel that looked a lot like Maligne Canyon, a stone’s throw away from the trail head. It had bowls and curves carved and worn out of its rock that sculpted it in beautiful formations. At times the water disappeared, into the underground karst system, only to reappear above ground farther along. And at times, it was far, far below us in deep crack chasms. It was really beautiful, and this dark photo just doesn’t do it justice.

We saw the rock in the photo above on the trail as we began our hike. Tell me this is not a sign! It looks like an old man, doesn’t it!? We thought this hike was an appropriate one to do on this particular day because it was our son’s 19th birthday, and with him off on his climbing trip, away from us, Bill, with a 19 year old son and now in his 51st year, felt like an OLD MAN! Ha ha! (I could laugh because I had yet to turn 50…ok, so it would happen in a few short months… but I could still laugh!)

We took a break about two thirds of the way up the mountain, at the base of a seriously impressive slab slope…. massive and grey and majestic, it towered over us.

No trees grew on it, so the sunlight broke through, warming us as we ate and rested. We got some amazing views of the mountains across the way (though NOTHING like what we’d see up top).

A little story about our lunch…

The night before, we’d walked from the JPL (Jasper Park Lodge) into town for dinner (we’d heard of a new restaurant there, called The Raven Bistro, that was excellent, that we had wanted to try). On the streets of town, we ran into Glenny, the owner of the Patricia Street Deli. A wonderfully kind & chatty, happy & enthusiastic, eclectic & energetic sort of guy, we’d gone to see him at his Deli for years, always getting his amazing sandwiches before any hike we did in the Jasper area. But we’re talking once, maybe twice a year, on a good year. So not very often.

Somehow he recognized us and stopped to say “hi.” I jokingly told him it was outrageous that he only opened at 10 in the morning, and that we’d miss his sandwiches the next day on our hike because we were doing a long, full day, adventure. Without blinking an eye, he said he’d open early for us. What time did we want to head out? 7:30? And he was insistent! We settled on 8am. (Holy cow! Can you imagine!?!)

Sure enough, there he was at 8am!! He talked and talked with us as he made delicious sandwiches (with roast chicken, lots of veggies, pickled jalapeños, pickled beets, homemade cranberry sauces… you name it! It went on it!). It was such a wonderful thing for him to do and put a delightful start & dose of excellent luck & good karma on our day!

And now, back to our hike…

After coming up through a tight pine forest of short trees at the tree line, we emerged into this steep, narrow alpine meadow. The meadow lay between the forest edge and the scree slope. It had beautiful views and incredibly hardy plants. I always love the bright splashes of colour that the lichen bring to the landscape! It comes in vivid lime green (as in the photo above), vibrant bright orange and varying shades of black and grey… and then there are very tiny plants that thrive up there in those harsh, windswept conditions.

Once we got to the scree slope, with our bellies full of delicious sannies, fuelling our screaming thighs & calves, we emerged into brilliant sunshine. This scree slope is one of the steepest we’d done in the mountains, at that point in our lives. It was not well trodden, so it was loose, made a little looser perhaps by the softness of the mud underneath parts of it from the melting snow patches.

We got to a place that was a moderate scramble, but I felt too exposed, and chickened out. We’d read in an online account that heading up toward the left was longer but easier, so I went that way, meeting Bill on top of the rock band feature. I have no pics because we had to use all hands and feet there. But this shows a bit the rock seam I came up.

The scree slope was deep, loose and steep. And ever so beautiful! I love the contrast of the light limestone with the bluebird sky! The trail was marked in spots with cairns (the triangular pile of rock in the left of this pic). Far down below, you can see the highway, the townsite, and some of the lakes in the Jasper area.

The views up there were absolutely incredible! We saw lakes we didn’t know existed. We saw the JPL grounds, far off in the distance. We saw the Jasper town site, so very small, w-a-y down below (the left side of the photo above, above the river). And we even saw the tip of Mount Robson off in the distance…. something you just don’t get to see in this part of the park! It was very easy to see the incredible amount of elevation gain we’d surmounted!

After taking in the views and resting for a while in the gorgeous sunshine, we headed back down to the edge of the treeline and got ourselves packed up for the trek down. Luckily someone had tagged a tree with orange tape so you could see the point at which you re-entered the forest (note to self: always pack along flagging tape for an off-route scramble!). But you couldn’t go too wrong here, as long as you kept the drainage channel on your left.

7.5 hours after we started, we were back at the car on the roadside, heading back to the shores of Lac Beauvert and the JPL. 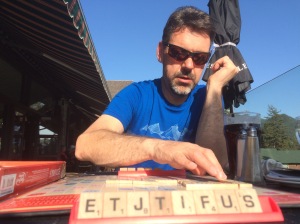 There we had dinner & drinks on the patio and played a mountain-themed scrabble game where it was double points for any word related to mountains (they have a bunch of board games there that you can sign out & play).

What a gorgeous weather day. What a fun adventure. What a perfect day.

It was so worth the struggle to get up there. Being on that scree slope pushed the limits of my comfort zone, but I felt really good afterwards. The journey down was long and hard. But the time we spent up top… taking in the views, soaking in the majesty of the landscape, basking in the companionship of our friendship, sharing the adventure…. it made it so very, very worth it.

Click here for more terrific hikes in Jasper National Park. And check out more hikes from Canada and our adventures around the world here.