Biking Through The Sacred Valley

Posted on October 28, 2016 by Sheri @trail2peaktheadventurouspath 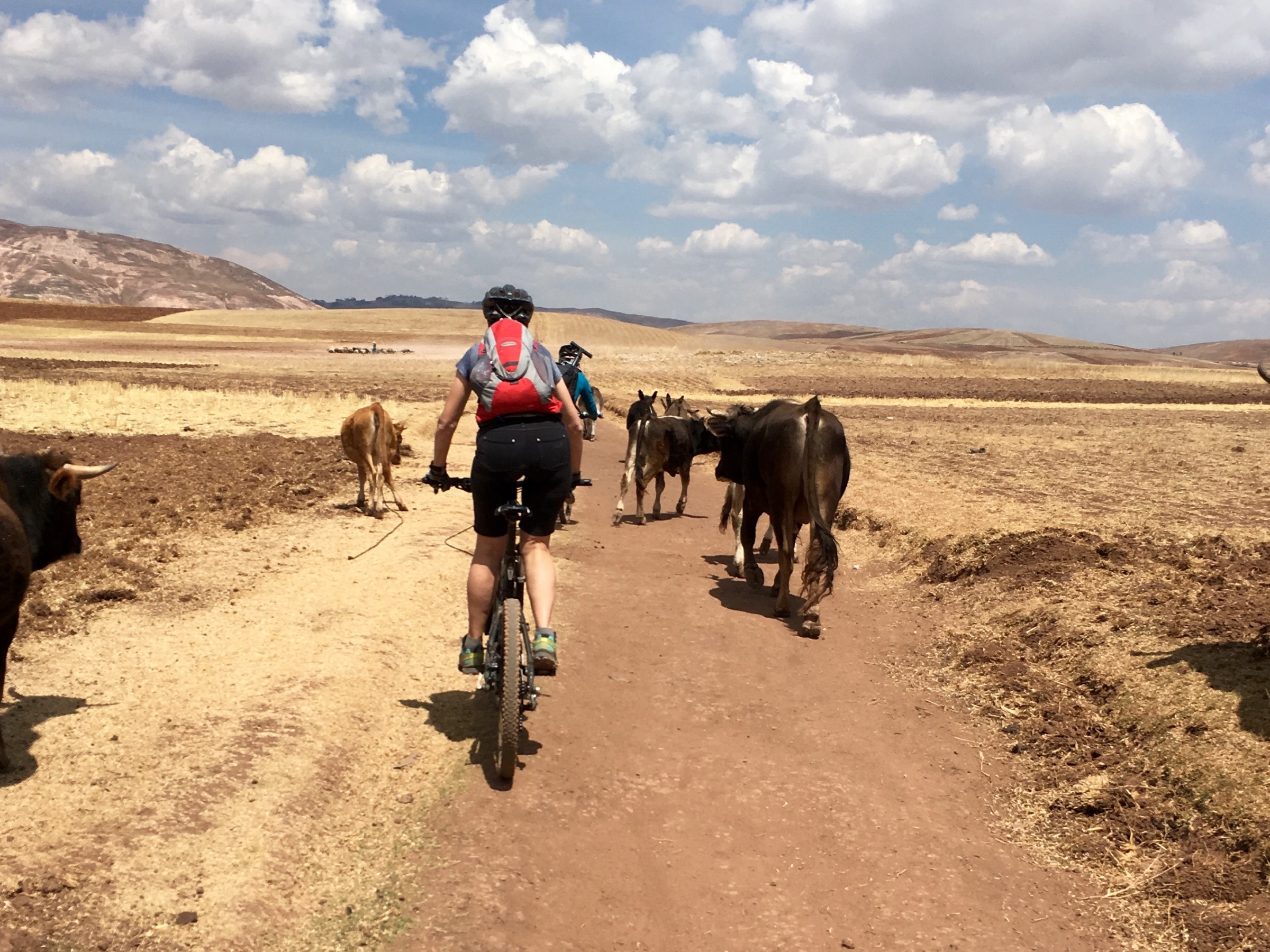 Touring the Sacred Valley by bike, rather than by tourist bus, is not the usual way to see the ancient archaeological sites of Maras and Moray.

Of course, watching your guide get thrown over his handlebars and into a cactus on a steep slope is probably not what tourists usually come to see in the Sacred Valley either. The usual tourist thing doesn’t involve pulling spines out of the seat of your guide’s pants and the backs of his arms. Nor is averting your eyes while your guide drops his drawers to have your husband check out his cheeks a typical occurrence! THAT is what I’ll always think of when I think of the Sacred Valley. But I’m getting ahead of myself….

We spent a fair bit of time going in and out of the Sacred Valley, touring its incredible archaeological sites during our time in Peru. The Sacred Valley is a long valley that follows the course of the Urubamba River, near Cusco.

The Incas revered this area not just because it was incredibly fertile land, capable of producing a wealth of food, but because the Incas felt it looked like the Milky Way. Anything on earth that could be interpreted or read from the sun, moon, stars and constellations was considered very sacred by the Incas.

We were pretty psyched to explore this landscape on two wheels and started our riding adventure in a small town called Cruspata (literally, “crossroads,” named for the two roads that cross each other there) with a guide we’d hired through a company that came highly recommended on Trip Advisor.

Now here’s the thing with Trip Advisor... no matter how many different kinds of tours a company offers, it only gets one listing on their site. This is something that most people do not know. So, if a very reputable company does top quality hiking/camping treks or terrific archaeological tours, their biking tours, perhaps only done by a handful of tourists a year, still get the rating of the company and its treks. The outfit we went through had bikes that were in lousy shape. We had 3 breakdowns and ultimately I gave my bike up so that parts could be salvaged to make 2 workable bikes so that Bill and our guide could finish the ride. And our guide was a rider who was not quite skilled enough to ride the tougher, rougher, more aggressive parts of the trail, which begs the question, “why are they taking tourists on such a technical trail without asking them their skill level first or having a guide who can stay safe there, himself?” But again, I’m getting ahead of myself…

Biking through the area was not easy, despite the fact that our day started out on flat roads with only the merest hint of hills. The altitude wreaked havoc with your stamina, that’s for sure. But rolling through it on two wheels was a really interesting way to see and experience the spectacularly beautiful landscape.

The small farmland plots we passed practiced crop rotation: they planted alfalfa (for guinea pigs), cereals like wheat, barley and quinoa, and vegetables like pumpkins and squash in cycles. Most plots lay fallow as we were there in very early spring, before the planting had begun. There were no fences, so animals were either tethered to stakes driven into the ground, or watched over by shepherds or very young children.

Late in the morning, we arrived at the first of two fantastic archaeological sites we’d see that day: the experimental agricultural terraces of Moray.

Moray is a Quechua word, based on moralla, the white dehydrated potato that you can find in any market and practically any household in Peru. The name seems fitting, as these terraces were all about growing food, and improving growing practices to make more food, with the potato being an extremely wide spread and important food crop in ancient and modern day Peru.

The Incas built their terraces here in natural sinkholes in the landscape, spending a lot of effort to build significant drainage using layers of deep pumice at their base. To this day, even in the rainy season, these terraced areas do not flood.

Every three terraces, you enter a different microclimate, a different set of growing conditions. Coca leaves and a wide variety of bean seeds have been found here, and it is estimated that many of the 400 types of corn and 2500 types of potatoes in Peru today were experimented on and developed here.

The terraces were never destroyed by the Spanish because they did not have any gold in or on them, and so they possessed no allure to the Spanish. The irony is that the wealth of food was the source of the Inca’s power over its populace… had the Spanish realized that the Inca’s power lay in food and not gold, things might look a little different here today.

Riding from Moray to Maras (or Man Meets Cactus)

The next part of our adventure took us on some fun, swift, and at times, extreme (even for this Rocky Mountain mountain biker) single track riding down from the heights of Moray to the walls of the Sacred Valley’s cliffs, down at Maras.

We had so many mechanical issues on this trip! Bill had 3 flats, I had a jamming chain, we both had bikes that wouldn’t stay in gear, and our guide had a bike that leaked so much hydraulic fluid that within the first half hour, he had no rear brakes at all! For those of you who don’t ride single track trails… you can ride without front brakes safely enough, but rear brakes are essential. If you rely on only the front wheel to brake, and you don’t come off your seat and hang the bulk of your body’s weight behind the seat, over the back wheel, your momentum will propel you over your handlebars if you squeeze your brakes too aggressively (as you do when you’re afraid, or out of control, on a very steep section or if you stay seated on your seat).

It all came to a head when we switched from farm track roads to the steep, rocky, dry & loose single track trails down to the Maras Salt Mines. Our poor guide wore a hole in the bottom of his shoe trying to use the resistance of his foot on his rear wheel as a rear brake. On the first steep section, he was thrown off his bike, over his handlebars and into a cactus! Thank goodness he landed on his back (he was wearing a backpack), and not face-first!

We must have pulled 20 cactus spines out of the back of his legs, his butt and his arms, poor guy! He was such a trooper! We offered to stop & call the support van for a pick up, but he was determined to walk steep sections from there on in, and ride the flatter parts, slowly. Somehow, we made it to Maras safely, without further incident.

The Salt Mines of Maras

The salt mines of Maras were really something neat to see! Run as a collective, that Minka principle of the chacana symbol that I have spoken about before in this blog, workers are not paid to work here. They do it as a community effort, and reap the benefits of what they harvest (which might explain why there were just so many salt sellers on the way down the hillside from the entrance gate to the salt pan terraces of the mine itself). 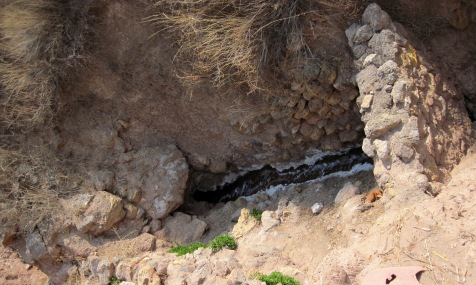 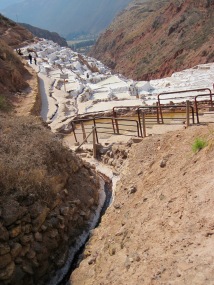 A warm, briny stream flows out of the cliff that we rode down and then into the man-made dehydration pools that filter down the valley’s slope. According to our guide, there are 4,500 pools (some guidebooks and blogs say there are as many as 5,700), formed with clay walls (using the adobo bricks we’d seen farm houses built out of on our ride through the region). Built much like the Incan agricultural terraces that we saw earlier in the day, they were designed to have water flow through them.

In the parking lot of the mine, our guide and the support van driver fixed up my bike for the guide to ride, repaired another flat tire on Bill’s bike with the inner tube from the front  wheel of the guide’s bike, and with two working bikes cobbled together, headed off to ride the most technical part of the trail. I was quite tired at this point, so I actually welcomed riding in the support van. It took them about 25 minutes to ride to the pick up point, and our driver and myself about an hour to do the journey by car! Clearly, their aggressive downhill dirt track was the faster way out of the area.

It’s nice to be able to slow things down when you travel. This wasn’t hiking, but it also wasn’t blasting past in busses and vans. (Ok… if truth be told, some of the fun sections were fast and blasting, but you get my drift.) Despite the bike issues, which provided, in their own way, little slice of life moments, this was a fun day. An exhausting day, and certainly hours longer than it needed to have been, but an eye opening, full-of-adventure-experiences day. No regrets.

8 Comments on “Biking Through The Sacred Valley”