Posted on September 6, 2016 by Sheri @trail2peaktheadventurouspath

The afternoon of our third day saw us taking a whirlwind city tour: 5 sights in 5 hours. While being shepherded around at a fast pace, through thick and intense crowds, up roads with long lines of tour busses all doing the same thing, and with orders of “vamos, vamos!” to get our group hustling a little faster while following flag #7 held high in the air wasn’t exactly our thing, we did learn a lot. I’ll share some of the more interesting stories & places with you here in the next couple of posts, starting with this one.

We weren’t allowed to take photos inside, so you’ll try to imagine this… we entered through the arched stronghold doorway in the picture above, and stepped into a baroque-styled world full of gold, glitter, ornamentation and outstanding architecture. Think massive ornamental pillars supporting huge expanses of domed roofs, each roof connected to form an image of a gigantic, bubbly cross in the ceiling of the building. Paintings with incredibly elaborate, gold painted, carved frames covered every square inch of space. Each apse on the side of the cathedral had ornamental artifacts full of silver and gold iconography. We’re talking over the top glitter & glitz.

The cathedral was started in 1560 and took 98 years to build. It outlasted 2 serious earthquakes due to the strong  Inca foundations on which it is built. These foundations are made of huge blocks of very hard volcanic rock, polished smooth (how? no one really knows), and held together with no mortar. “Very antiseismic,” our guide repeated many times, with a sense of tremendous reverence and awe. 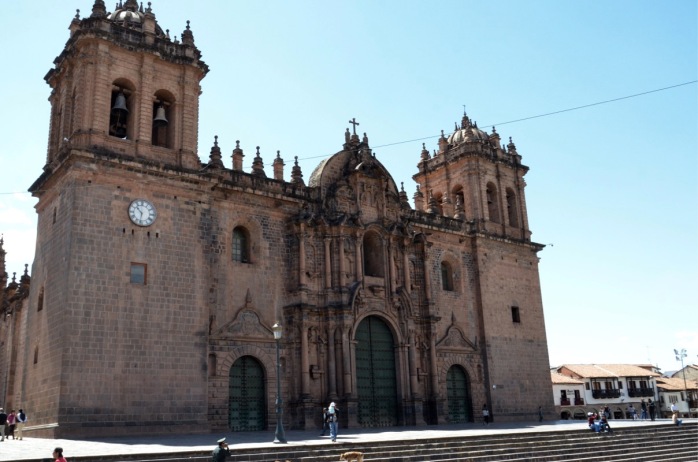 No photos were allowed in the cathedral, so bear with me as I try to create a few poignant mental pictures for you.

The overwhelming sense I got from our guide was the Peruvian pride she felt. She resolutely pointed out and repeated the ways in which Peruvian culture was, perhaps with a little guile, included in the Roman Catholicism practiced here. That might account for its popularity: Cusco and its surrounding area have 500,000 people, 91% of whom are practicing catholics. Here’s a few interesting ways in which that Peruvian culture snuck into this cross-shaped, incredibly Spanish-influenced, prominent cathedral:

1) Unlike most Spanish Cathedrals built through South America, the carved wood under the gold painted pillars was all from the Peruvian Amazon. Not Nicaraguan, not Costa Rican, not (insert a long list of other countries … she loved her lists!). It was Peruvian. She repeated this to make sure we understood its significance to her.

2) Throughout the cathedral, there are over 500 paintings, all done by a school of Peruvian and Italian painters between 1600 and 1800. All the paintings were done in varying shades of red, green and blue… all colours important in Incan iconography.

3) The most interesting painting to me was a gigantic painting of the last supper. It was about 20’ tall and 40’ wide. In it, and this might be a way of making Catholicism more palatable to the indigenous Peruvians, was such a clever inclusion of Peruvian foods, all of their local specialities. Dead centre, in the middle of the painting, was a platter with a skinned, roasted guinea pig! The disciples were all drinking non alcoholic purple corn drink called chicha morada (more to come about this in blogposts to follow). Judas had the face of Pizzaro, one of the prime conquerors of the city! Around the table were all the things the Runas (that’s the name for the indigenous Peruvians… the “Inca” is a name only given to the kings themselves) used in their temple worship: seeds, coca leaves, corn (maize), chocolate, tomatoes, hot chillies, quinoa grains, granadilla, and potatoes. Here’s an image of the painting (strangely, its been flipped so it’s a mirrored image), borrowed from the net…

4) These foods, once again, all things used historically in offerings in the temples, were usually burned in stone niches and walls, were carved into the pillars holding up all of the beautiful arched ceilings of the cathedral. You almost miss them if you don’t look carefully, but they are all there from the coca leaves right on through to the potatoes and corn and seeds like quinoa. Subversive. But a clever way of making Roman Catholicism incorporate elements of the old religion to become more easily accepted by the populace.

5) The statue that she was most proud of was what she called the Cinnamon Christ. Cinnamon is the descriptive word she used time and again to describe Peruvian skin colour. It had human hair, a body made of corn stalks, but covered in llama skin, leathered to look so real it was incredible. And ever so creepy. The crucified Cinnamon Christ was dressed with a crown of solid gold embedded with South African diamonds. It had a skirt that was carefully sewn and crafted to include 500 textile fibres, indigenous to Peru: everything from corn silk to alpaca wool, and llama hair to cotton. She said the Cinnamon Christ was their new god and people love him and respect him.

She related what she felt is perhaps the most important story about this Cinnamon Christ statue, and the way she told it, with a certain amount of reverence in her voice, made it sound almost like a fairy tale. In 1950 there was a large  earthquake (7.6 Richter on the scale) that rocked the city for two and a half minutes straight. People in the cathedral tore down the Cinnamon Christ and ran outside with him to the central square to save him. When they got to the centre of the square, the earthquake stopped. The cathedral remained standing. “And the Cinnamon Christ has been loved by the people ever since.”

Join 294 other subscribers
Follow Trail to Peak: The Adventurous Path on WordPress.com